AP — The US ramped up COVID-19 vaccinations in the past few days after a slower-than-expected start, bringing the number of shots dispensed to about 4 million, government health officials said Sunday.

Dr. Anthony Fauci, the nation’s top infectious-disease expert, also said on ABC’s “This Week” that US President-elect Joe Biden’s pledge to administer 100 million shots of the vaccine within his first 100 days in office is achievable.

And he rejected President Donald Trump’s false claim on Twitter that coronavirus deaths and cases in the US have been greatly exaggerated.

“All you need to do … is go into the trenches, go into the hospitals, go into the intensive care units and see what is happening. Those are real numbers, real people and real deaths,” Fauci said on NBC’s “Meet the Press.”

The US death toll has climbed past 350,000, the most of any country, according to data compiled by Johns Hopkins University, while more than 20 million people nationwide have been infected. States have reported record numbers of cases over the past few days, and funeral homes in Southern California are being inundated with bodies.

Los Angeles Mayor Eric Garcetti said the pandemic is getting worse in his city as the virus spreads rapidly within households and people let their guard down with news of a vaccine’s arrival. “This is a virus that preys off of our weakness, preys off of our exhaustion,” he said on CBS’ “Face the Nation.” 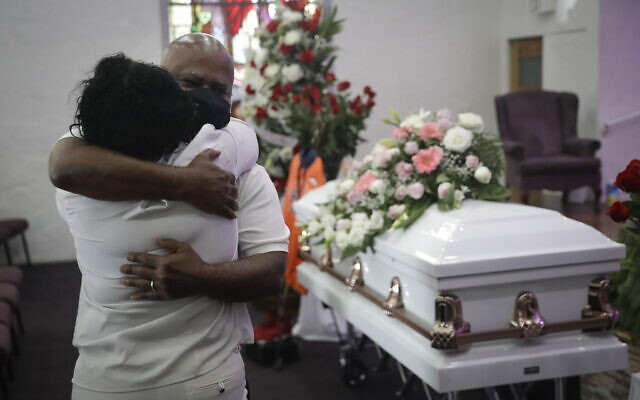 In this July 21, 2020, file photo, Darryl Hutchinson, facing camera, is hugged by a relative during a funeral service for Lydia Nunez, who was Hutchinson’s cousin at the Metropolitan Baptist Church in Los Angeles. Nunez died from COVID-19. Southern California funeral homes are turning away bereaved families because they’re running out of space for the bodies piling up during an unrelenting coronavirus surge. (AP Photo/Marcio Jose Sanchez, File)

Experts believe that the real numbers of US deaths and infections are much higher and that many cases were overlooked, in part because of insufficient testing.

Fauci said he has seen “some little glimmer of hope” after 1.5 million doses were administered in the previous 72 hours, or an average of about 500,000 per day, a marked increase in vaccinations. He said that brings the total to about 4 million.

He acknowledged the US fell short of its goal of having 20 million doses shipped and distributed by the end of December.

“There have been a couple of glitches. That’s understandable,” Fauci said. “We are not where we want to be, there’s no doubt about that.”

But he expressed optimism that the momentum will pick up by mid-January and that ultimately the US will be vaccinating 1 million people a day. Biden’s “goal of…

Get real time updates directly on you device, subscribe now.

The meaning of health has evolved over time. In keeping with the biomedical perspective, early definitions of health focused on the theme of the body's ability to function; health was seen as a state of normal function that could be disrupted from time to time by disease. An example of such a definition of health

A Worker Accused of Spoiling More Than 500 Vaccine Doses Is Arrested: Live Covid

Health Ministry D-G: There will be two-week break in vaccine campaign

Colorado man in his 20s has variant of virus

US coronavirus: Contact tracing is no longer possible across…

How modelling Covid has changed the way we think about…